I am now in a position to seriously look for an airhead mono, preferably R80Rt or R100RT. Possibly a light restoration job, more on the cosmetic side as I have limited technical knowledge, especially airhead specific!

Is there anything I particularly need to be aware of and check out prior to purchase, and are there any pros and cons re different model years ?

Good luck with your search

There are very few differences in the Mono bikes from '85 to '95. I think condition and mileage are probably the only parameters you need to worry about. 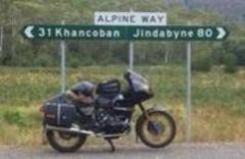 I purchased a 1989 low mileage R80RT approx 5 years ago. Mechanically it’s been sound, however I have had to replace numerous rubber parts due to deterioration of the rubber over time. These include gearbox to driveshaft boot, screen rubber seal, also replaced screen due to discolouration, Speedo cable to gearbox grommet, seal between fairing storage boxes and fairing, rubber clock surrounds. This year have done fork seals although no leaks from those in place and replaced jets and diaphragms using overhaul kits from Motorworks. The latter has resulted in a much smoother and responsive engine. Nice bike to ride and easy to maintain, I would suggest, as others have, go for the most original you can get with a low mileage. So many of these bikes are being butchered to make ridiculously priced “bobbers” that the price for original bikes are increasing but you can still get some good deals.
Top

As long as they have had the correct service interval then a high mileage bike will be ok. This one is high but has been well looked after. Worth a phone call. I've only ever rode the R80 and found it very smooth I've aslo been told the R100 can be a bit rough? but try them first.
My 85 R80RT would ride all day 2 up fully loaded and is a great touring bike.

Just remembered try and go for the non para lever drive shaft as they run in oil and I think it's better for lubrication.
I tried to be normal once, worst two minutes of my life.
Blue belt in Serious tea drinking.

And a VW trike so I don't fall off

One thing to look for is the speedo cable boot in to the top of the gear box. Water runs down it and into the gearbox and mixes with the oil. Check if its got a tight new boot. If the gearbox bearings get water/ oil mix they will wear quick. If the gearbox sounds rumbly when warm pull in the clutch to see if the noise stops. A full set of 6 bearings is £119 from Motorworks, or rebuilt box £650.
And airhead engines are very easy to work on.
I tried to be normal once, worst two minutes of my life.
Blue belt in Serious tea drinking.

And a VW trike so I don't fall off

Hi I expect a
Yep 100s can be rough but also my 80 was better for my ride to work due to aa combination of speed limits, peek power and final drive ratio I think.

The R100RT I have is a 1995 model. Compared to the earlier bikes braking and handling are much improved. It is almost a KRT but with boxer engine.

On the subject of brakes...

According to the lists, the Mono airheads got the same front brakes as some K100 and K75 models from 08/88. Prior to that (between '85 and '88) they had slightly different parts but the leading dimensions are the same. The only other difference is that some bikes got fitted with floating discs. As far as the lists are concerned, these were exchange items and could be fitted to all Monoshock machines. It's not clear whether any airheads left the factory with them. The main difference between different bikes is the diameter of the master cylinder but there is no reliable information on which size each vehicle got... it seemed to vary between construction batches.

Airheads got the 'K' type front forks right from the start of the Monoshock production. There was a change in fork internals this is mainly around the securing of the top cap... springs and dampers remained the same... from 09/85 but from then on, they stayed the same to the end of production. The forks are based on those made for the 'K' bikes but they aren't the same and there are very few common parts.

Thanks all for your responses, much appreciated.
Top
Post Reply
11 posts • Page 1 of 1

Users browsing this forum: No registered users and 60 guests